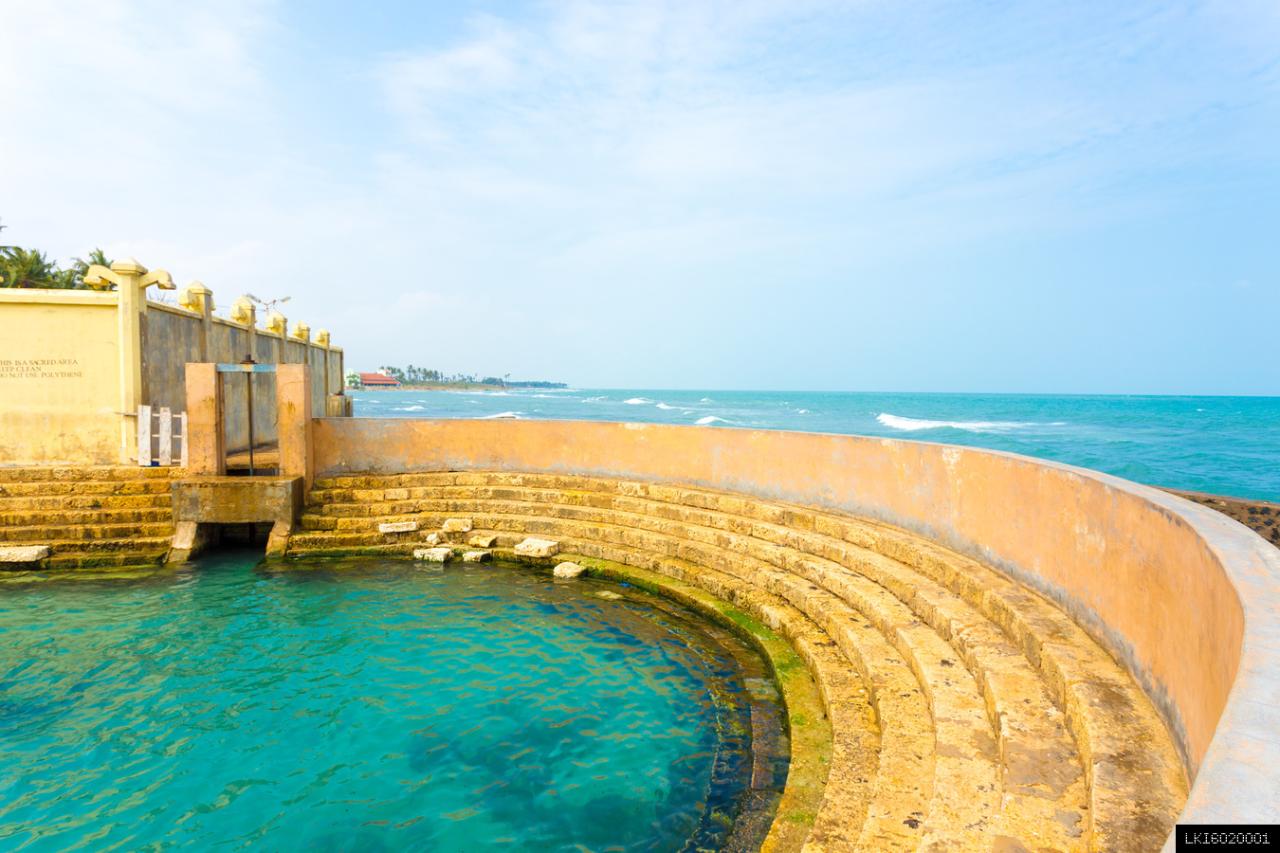 Escapade to the East

Arrive at Colombo International Airport. Here, you will be met by a designated chauffer guide from Lakpura. After the formalities at the airport you will be escorted to your air-conditioned vehicle and proceed to Negombo and check in to the hotel. (Travel Time: 15 to 30 mins)

After breakfast at the hotel, check out and proceed to Jaffna, en route make a pause at Chilaw and visit Munneswaram Kovil. (Travel Time: 20 to 30 mins)

Munneswaram temple is an important regional Hindu temple complex in Sri Lanka. It has been in existence at least since 1000 CE, although myths surrounding the temple associate it with the popular Indian epic Ramayana, and its legendary hero-king Rama. The temple is one of five ancient temples dedicated to Shiva in the region

Thereafter continue to Jaffna and check in to the hotel and relax. (Travel Time: 6 to 6 ½ hrs)

Jaffna, which consists of the northern peninsula of the island with a capital city under the same name. Marvel at the architecture and creativity of ancient Hindu Temples, such as Nallur, Nainativu or Mavittapuram, with over four millenia worth of history to their name. Get to see many other attractions such as the Jaffna's Dutch Fort; war memorials from the recent war; the Saraswathy Mahal Library, Nagadeepa Vihara and the palace of the last king of Jaffna, Cankili I.

After breakfast at the hotel proceed to Nagadeepa Island. (Travel Time: 1 to 1 ½ hrs)

Tour Nayinathivu a historic island to the north of Jaffna, which is known as Nagadeepa by the Sinhalese; and had the name Manipallavam in ancient times. Get to see the land where the Naga people who worshipped the snake (or Naga) are believed to have lived. See the evidence of their passing in the snake worship at the ancient Nainativu Nagapooshani Amman Temple and the legends and history of Nagadeepa Purana Vihara.

Visit the historic Nagadeepa Purana Viharaya which is one of just sixteen of the holiest Buddhist sites in Sri Lanka. See the unique architecture of this vihara which is believed to be the place that Buddha stopped at during his second visit to Sri Lanka. Listen to the legends and history surrounding the visit and the construction of the temple.

Visit the Nainativu Nagaooshani Amman Temple, with a proven history of at least two millennia as according to records by Ptolemy. Get to know about the legends surrounding the Temples; such as those of God Indra's worship and much more. Enjoy looking at the majestic Dravidian Hindu architecture; with its four beautiful Gopurams, several halls or Mandapams, and chariots. Nainativu Nagaooshani Amman Temple is one of only 64 Shakthi Peedams around the world.

On completion of the visit, return to the hotel and relax

After breakfast at the hotel proceed to Trincomalee and check into the hotel. (Travel Time: 4 to 4 ½  hrs)

Visit this ancient temple praised by famous Indian poet-saints and mentioned by several famous personas around the world. See the beautiful murals describing the history of the temple. Worship at the little cave shrine that is has its start in 1580 BC, as compared to the actual temple which was developed in 400 BC. Marvel at the giant statue of King Ravana who, according to legend, worshipped this shrine.

Visit the Fort of Trincomalee originally built by the Portuguese in 1624 CE. See the stones that once formed the Koneswaram temple before the Portuguese destroyed it. Listen to the history of Fort Frederick, which was dismantled and rebuilt by the Dutch.

On completion return to the hotel and relax. (Travel Time: 30 to 40 mins)

After breakfast at the hotel, visit Pigeon Island. (Travel Time: 30 to 40 mins)

Visit the Pigeon Island National Park consisting of the smaller pigeon island and larger pigeon island and the coral reef that encircles the larger island. See the rock pigeon that makes the island its breeding grounds. Explore the islands to see the many coral types and fauna that can be found here

Explore Thiriyai, or Thiriyaya as it is known now, is a village where Tamil Buddhism was practiced in ancient times. Visit the Girihadu Seya Stupa, which was built to mark the location where according to legend Buddha is gave hair relics to two traders who served him porridge as alms. See the old fortress of one of the last Vanniyar Chiefs who ruled the area.

On completion return back to the hotel.

With a packed breakfast go on a lovely Whale watching safari

This five-hour tour gives you an opportunity to see the biggest mammals on earth, the whales, in their natural habitat. Get a chance to see blue whales, sperm whales and fin whales as they swim in the waters to the south of Sri Lanka. Gain more knowledge about the whales as a species from a qualified naturalist and learn to identify them. This tour gives you a responsible whale watching experience with a minimal imprint on nature.

Thereafter return to the hotel and spend the evening leisurely at Hotel.

After breakfast check out from the hotel and proceed Polonnaruwa and visit the ancient Kingdom of Polonnaruwa (Travel Time: 1 ½ to 2 hrs)

Visit the ancient city of Polonnaruwa, which was the second major capital of Sri Lanka. Walk through the ruins of the city that flourished between the 10th to the 13th century AD. View important monuments such as Gal Vihara, Vatadage, the lotus bath, Lankathilaka Temple and the statue of King Parakramabahu whose reign was considered the golden age of Polonnaruwa. Get to know more about Sri Lanka's ancient history.

Thereafter proceed to Minneriya and go on a lovely evening safari in Minneriya National Park.

This three-hour safari takes you on a ride through the Minneriya National Park. Enjoy the sight of over 150 elephants congregating in one place during the famous Great Elephant Gathering, which happens in the dry season between May to October. In addition to elephants, get a chance to also see many mammals, birds, reptiles and amphibians in the scrublands, forests and other areas.

On completion return back to the hotel.

Climb the 5th century AD rock fortress, Sigiriya, where the King Kasyapa ruled. Walk through the entrance framed by the paws of a lion that is quite appropriate for its name, ' the Lion Rock'. View the beautiful unfading murals that brought Sigiriya its fame. Climb the steep staircase to see the terraced gardens and still-working cisterns.  Walk through the tunnels leading to the palace as you get a feel for times long past.

Thereafter go on a lovely village tour in Sigiriya.

Get a chance to go on an oxen cart ride and experience the world from the view of a village farmer. Have a relaxing catamaran safari through a calm lake. Walk through the golden fields ripe with their harvest of paddy. Watch an enjoyable traditional cooking demonstration that teaches you the basics of Sri Lankan cuisine. Delight your tastebuds with a home cooked lunch; made over a wood-fire and served on fragrant lotus leaves placed over woven trays. Enjoy the life of a Sri Lankan villager, just this day.

Enter the historic caves of the Golden Temple of Dambulla, dating back to the 1st century BC. View the ancient murals depicting the life story of Lord Gautama Buddha. Look at the hundreds of figurines of Buddha and other deities scattered throughout the five main caves. Visit the Cave of the Divine King, Cave of the Great King and the Great New Monastery. See the giant golden Buddha Statue just a little distance outside the cave complex.

On completion return to the hotel and relax.

After the breakfast check out from the hotel and proceed to Colombo and explore the Commercial City of Sri Lanka, Colombo. (Travel Time: 5 ½ to 6  hrs)

On completion return to the hotel and relax.

After a relaxed morning and breakfast at the hotel check out and, drive to the Airport for your flight back home.

Cancellation, No Show and Refund Policy Cancellation must be in writing and sent by you/your travel agent who made the booking. Cancellations take effect from the date the written notice is received. No refund in full or in part will be given for unutilized services in the package(s) once you commence using the product or service. • Up to 21 days before the Tour starts – Fixed processing fee of USD 30.00 and the balance will be refunded. In case of a refund to be made via an international bank transfer, all bank fees to be borne by the guest. A refund to the credit card is subject to above processing fee only. • Less than 21 days and in case of “No Show” – No Refunds. • No refunds will be entertained under whatsoever condition once the guest arrives in Sri Lanka. • We reserve the right to cancel your holiday because of unforeseen circumstances.